No vapor returns facility at shore.
No venting of vapor when ship alongside Jetty.
Ship should come with coolant at temp about minus 33 deg. C or below.
Sample will be collected from ship's tanks on arrival to analyze for Ammonia purity. Therefore, vessel to arrive with sufficient pressure in tanks to collect samples.
Vessel will be passed for loading only when Ammonia purity is> 99% by volume.

The BOROUGE Polyethylene Terminal at Ruwais is situated immediately to the East of Ruwais small boat Harbor, with a protrusion at the western end to accommodate Ro-Ro / Gearless Container feeder/Ocean going vessels. The Ro-Ro ramp is a class B ramp in accordance with BSMA 97. The Container feeder terminal is designed to accommodate a range of vessels with the following characteristics: The container berths are equipped with two STS cranes each on berths 1 & 2 & four mobile RTG cranes each on berths 3 & 4 respectively.

The design is made on the basis that fenders on the quay wall absorb all the energy of berthing vessels. The fender system is designed to accommodate vessels as per the berth criteria given above.

Bollards have a maximum Mooring Load capacity of 60 tons.

For stability consideration, berthing and mooring forces are based on a wind speed of 110 km/h.

A Gangway shall be provided by the ship’s personnel. A warning shall be placed adjacent to the gangway prohibiting the entrance of unauthorized persons, prohibiting smoking and the use of open flames.

The approach channel is marked with 13 numbers of buoys as per IALA standards.

Communication between ship crew and BOROUGE Terminal personnel will be established by means of portable radios . This equipment will be according to BOROUGE safety standards and must be tested every time prior to starting the loading / unloading operation.

The ship should leave the terminal immediately after the completion of loading and documentation. Before informing the pilot for un-berthing, it is the responsibility of the Master to ensure that all connections between the ship and shore are removed and that she is ready to sail.

The master of the vessel, for the time the vessel is alongside the BOROUGE terminal, is responsible for reporting all incidents on board the ship immediately to Petroleum Ports Authority through Port Control and BOROUGE Safety Department.

The ship’s safety equipment shall be ready prior to starting any loading or unloading operation. This will be verified by completion of the Ro-Ro/Container feeder ship/shore safety checklist.

Sulphur Berth 2 has been converted for use as a receiving terminal for LNG. Some of the modifications made were the addition of mooring dolphin No. 5 to the SE of terminal, and the replacement of the Quick Release Hooks (QRH) x 100 tonnes x 3 each on the existing mooring dolphins (5 nos).

The berth consists of four (4) breasting dolphins. The two (2) end dolphins are equipped with 4 (four) quick release hooks assemblies and the center two only have a bollard (non-functional) facility. In addition, there are Five (5) mooring dolphins, three (3) at fore & two at aft ends, each of which are equipped with three (3) x 100 tonnes quick release hooks assemblies.

The breasting/mooring dolphins are supported by 5 (Five) piles.

The FSRU shall be moored starboard side to the jetty.

The Ruwais LNG Terminal has been designed to receive in addition to the FSRU, an LNGCs sized up to 173,000 m3.

The LNG cargoes are delivered to the FSRU via ship-to-ship (STS) transfer operations with LNGC arranged in a double banked arrangement. The FSRU is equipped with STS arrangement consisting of;

The fenders are placed on the port side of the FSRU. The primary fender string and both baby fenders shall be secured with their dedicated wires to bollards on the FSRU fore and aft deck areas. The safety wire shall be made off to a mooring bit.

The secondary (baby) fenders shall be one (1) placed forward and one (1) placed aft at the upper and outer ends of the parallel mid-body, suspended approximately 1.5 m below the main deck.

As a general rule, LNG transfer operations by STS may take place in a sea state up to a maximum wave height of 2.0 m.

The suitability of weather conditions for mooring and remaining moored at the RLNGT reside with the PPA in consultation with the vessels Master.

Departure of the FSRU is at the discretion of the Petroleum Ports Authority / FSRU Master.

The FSRU shall moor to the RLNGT Jetty under the direction of the Pilot in accordance with the (pre)approved mooring line configuration.

Mooring lines shall be pre-tensioned with consideration for existing and anticipated wind conditions and the stage of the tide. Pre-tensioning shall be approximately ten (10) tons on all lines.

The LNG Terminal jetty mooring arrangement is designed to moor the FSRU by means of sixteen (16) lines. Two (2) quadruple quick release hooks (QRH) are located on berthing dolphins (BD) 1 and 4. Even though there are four hooks. Five (5) MDs, each fitted with triple quick release hooks, are located three (3) forward and two (2) aft in way of the vessel bow and stern locations. These hooks can all be used.

Mooring line loads from the FSRU and the Jetty Control Room (JCR). The actuation of the QRH function is controlled locally and from the JCR.

The four berthing dolphins are equipped with SCN1600 (E2.8) super-cone fenders from Trelleborg.

The RLNGT Operations Team shall control the lifting of the jetty gangway across the vessels handrail and position the gangway ladder on the appropriate vessel ‘strongpoint’ under the direction of the responsible officer from the FSRU Excelerate.

RLNG Staff is responsible for the maintenance and proper operation of the gangway.

The FSRU staff is responsible for access control in accordance with the ISPS Code and company security procedures.

There will be no crew changes nor shore visits for personnel on the LNGC.

The transfer of personnel between the FSRU and the LNGC shall be arranged by means of “Safe Access” via an approved type Personnel Transfer Arrangement.

Only personnel essential for operations shall be transferred between the vessels. Essential persons include, but are not limited to:

The FSRU staff will attend STS pre-transfer meeting onboard of the LNGC. 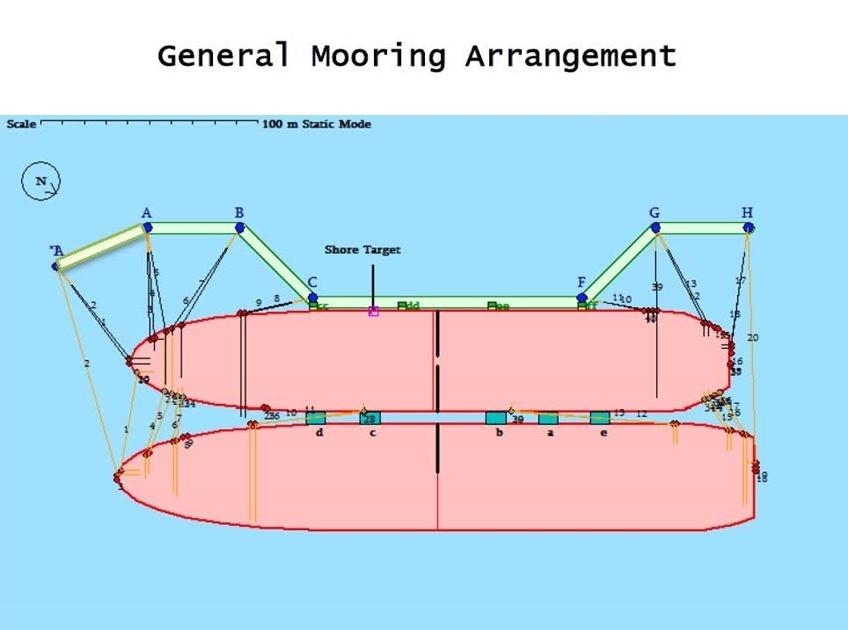 Ruwais Service Harbour, named as Ruwais Industrial Area Services Harbour (RIASH) consists of four berths and one Ro – Ro berth. It is situated to the East of the Ruwais Petroleum Complex.

Vessels and barges with a maximum draft of less than 6.0 meters may enter and lie safely alongside.

ADNOC Logistics & Services /OSRC is using these berths for port operations/pollution control. Jetty No. 4 is in use for OPCOs project heavy lifts operations.

The VTIS station is installed in the Ruwais Port Control Room.

Abu Dhabi Ports has developed and commissioned a Cruise terminal on the SE corner of Sir Baniyas Island. The terminal consists of two berths, Berth-1 (NE berth) and Bert-2 (SW Berth). The parameters for both berths are as per below:

The cool winter season extends over November to February with mean daily maximum temperatures of 25 to 30° C and night temperatures of 10 to 15° C. The lowest recorded temperature being 4° C. Ground frost can occur inland. The hot summer season extends over May to September with maximum day temperatures between 40 to 45°C, the highest recorded being 48° C. Night temperatures are about 20 to 25° C. Therefore, it is important that during the hot season the temperature within the visiting tankers accommodation shall not exceed 25°C. Relative humidity is high throughout the year averaging between 50 to 60 per cent by day and 75 to 80 per cent by night. Heavy dew may be experienced throughout the year. Rainfall is usually associated with thunderstorms which are prevalent from November to May giving a total annual rainfall of 10 to 50 mm. Rain is rare during the remaining months while in some years there is none at all. Throughout the year the prevailing winds are from the West to North North East sector. They are strongest between November and April when they occasionally reach gale force. Gusts of up to 50 knots have been recorded (April) and a 24-hour mean wind speed of 32 knots from the North-West is on record (January). The shamal or strong North West wind may blow for periods of up to three days and raise a rough sea with waves up to 4.5 meters. Land and sea breeze is experienced throughout the year. Visibility is 10 nautical miles for 70 per cent of the time and less than 2 nautical miles up to 5 per cent on occasions due to dust, haze or radiation fog. Fog can occur during any month of the year but is most frequent in winter. Normally it develops during the night and early morning and clears by 10.00 hours. Usually the fog banks drift to seaward towards Sir Baniyas Island. Sea temperatures at 3 meters depth, range from 20°C (in winter), to 32° C (in summer). During the summer the 15 meters depth temperature is only a degree or so lower than that at the surface.

Prevailing winds are from the North West. However there are occasions, when sudden gusts of local ‘Shamal’ winds may be experienced where winds can go as high as 50kts. or higher. Rise of tide can be up to 2 meters, but the usual variation is 1 meter. The highest average, spring high tide is about 2.0 meters above chart datum. The lowest average, neap high tide is 1.0 meter above chart datum.

In the outer approaches to Ruwais, tidal streams would appear to attain a maximum of 1 knot while 1.7 knots may be encountered in the channel NE of Jazirat Sir Baniyas.

_Tidal currents in the area of the berths seldom exceed 0.4 knots. Tidal current is generally along a NNW - SSE axis.

_Tides are generally diurnal; winds from NE and NW may cause an increase up to 0.6 meters in the height of the tide. Max. Tidal rise is 1.2 m.